How can technical assistance help

Just like most other crops, coffee plants are vulnerable to pests and diseases. For centuries, this has posed a huge challenge for farmers all around the world. A large-scale infestation or outbreak can severely damage coffee plants and lead to a significant financial loss for producers.

As such, it’s crucial for farmers to understand the measures they need to take in order to mitigate the impact of pests and diseases.

Pablo Picazzo Yamasaki and Angelica de la Paz Pérez work with On the Ground (OTG), supporting producers to mitigate the spread of disease and improve production control across the farming highlands of Chiapas, Mexico. They told us about how farmers can defend against pests and diseases through technical assistance. Read on to learn what they had to say 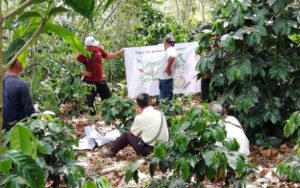 Pests and diseases have been a challenge for coffee producers for hundreds of years. Plants affected by any one of a number of conditions can become less productive, yield lower quality coffee, or die altogether.

In turn, this leads to an additional financial burden for the producer. Lower productivity means less return on the producer’s initial investment, as does a decrease in quality. In addition to this, replanting efforts and the purchase of fertilisers, insecticides, or fungicides all incur extra costs.

Although there are many different pests and diseases that affect coffee plants in a range of ways, some are more prevalent than others. Let’s take a look at some of the most common.

Coffee leaf rust, known as la roya in Spanish, is one of the most significant challenges that coffee farmers face all around the world.

Coffee leaf rust is an airborne disease caused by the Hemileia vastatrix fungus. The infection presents as a yellowish-orange dust on the underside of the plant’s leaves.

Over time, it impedes the coffee plant’s ability to photosynthesise. This stops the tree from generating energy, which in turn weakens it and prevents cherries from fully developing and ripening. This results in lighter beans, decreased productivity, and undesirable flavours.

In 2012, a leaf rust epidemic swept coffee producing countries in Latin America and the Caribbean. It has since been estimated that this caused more than US $1 billion of damage in just two years.

Research from World Coffee Research indicates that just five years on, the epidemic had affected approximately 70% of coffee farms in Central America. This resulted in 1.7 million coffee farm workers losing their jobs, leading to some US $3.2 billion in damage and lost income.

Pablo says that many historically popular arabica varieties, such as Typica, Bourbon, Mundo Novo, and Caturra, are more susceptible to the fungus. In recent years, he says many Central American farmers have replanted their farms with rust-resistant varieties; these include Marsellesa, Costa Rica 95, and Anacafe 14. 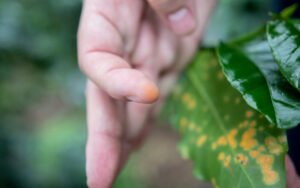 Coffee wilt disease (tracheomycosis) is caused by the Fusarium xylarioides fungus. It blocks the circulation of water and sap, causing leaves to fall, branches to die, and premature cherry ripening, before ending with full plant death. Once infected, death is inevitable, meaning that the best defence is prevention.

First identified in 1927 in the Central African Republic, this plant affects the production of both robusta and arabica across East and Central Africa.

Coffee berry disease (CBD) is caused by the Colletotrichum kahawae fungus. First reported in Kenya in 1922, it causes lesions to form on coffee cherries. These lesions halt development and eventually cause the cherries to rot and fall from the branch.

Cherries are most susceptible when green and unripe, supposedly between four and 14 weeks after flowering. CBD can be recognised by the colour of the lesions on the cherry, which often appear as black or brown spots that eventually grow to consume the entire surface. Fungicides, often copper-based, can be used to mitigate the spread of CBD.

Ojo de gallo literally translates to “rooster’s eye” In English, but it is also known as American leaf spot.

Caused by the Mycena citricolor fungus, this disease is widespread across Latin America, where it affects coffee plants as well as other crops.

Ojo de gallo causes brown, subcircular spots on coffee leaves, as well as stalks and berries. Upon closer inspection, you’ll be able to see small, luminescent mushrooms on these leaves. If left untreated, these leaves will eventually fall, causing plant growth and yield to be stunted. 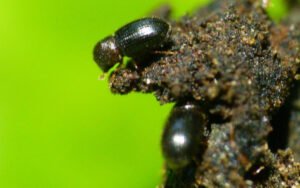 The coffee berry borer, known as la broca in Spanish, is a tiny black beetle that is less than two millimeters in length when fully grown. Despite its size, the borer beetle is one of coffee’s biggest pests. It is present in almost all coffee-producing countries.

These tiny insects burrow into coffee cherries to lay their eggs. Pablo says: “The perforation in the coffee seed ends up causing a significant loss for producers.” This is because these perforations cause the quality of the coffee to decrease, and can eventually cause cherries to fall.

It takes between 25 and 45 days for a borer beetle to grow from larva to adulthood. It then becomes able to reproduce, causing the problem to grow further. “The coffee berry borer reproduces in warm climates at altitudes up to 1,200 m.a.s.l.,” Pablo adds.

Nematodes are microscopic parasites that attack the roots of the coffee plant, preventing it from absorbing nutrients and water.

This damage causes the leaves to turn yellow and wilt, stunting plant growth and affecting productivity. In severe cases, it can also cause plant death. 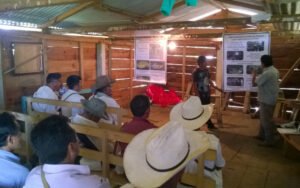 HOW DOES TECHNICAL ASSISTANCE HELP AGAINST DISEASES AND PESTS?

Pablo and Angelica have been implementing technical assistance programmes with members of the Maya Vinic cooperative since 2017. Together with Maya Vinic’s board of directors and Chris Treter of Michigan-based roaster Higher Grounds Trading, they designed the programme for implementation by On The Ground (OTG).

As partners with OTG (a sister non-profit of Higher Grounds Trading), Pablo and Angelica tell me how they brought the work of Project Chiapas to the Maya Vinic cooperative.

A focus on disease mitigation through technical assistance has supported them to address what OTG describes as a “changing environment that is threatening farming communities across the globe”.

However, doing so is easier said than done. While OTG has supported partners in Maya Vinic to replant their fields with the Carnica variety – which is resistant to coffee leaf rust – the time between planting and the first harvest is a concern.

This is because, as this World Coffee Research article states, experts believe that leaf rust-resistant varieties may end up being susceptible to adapted strains of the fungus over time.

OTG’s website even states that experts believe La Roya will begin to affect the Carnica variety within 3 to 5 years. This is precisely the point at which these new plants in Maya Vinic will begin to bear harvestable fruit.

Notable evidence that coffee leaf rust is able to mutate emerged in Honduras in 2017. After being widely adopted by Honduran farmers for its resistance to leaf rust, the Lempira variety (a cross between Timor 832/1 and Caturra) was actually found to be susceptible to a different mutation of the fungus. 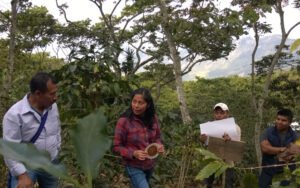 MITIGATING THE IMPACT OF PESTS AND DISEASES

Alongside replanting, producers can use fungicides and pesticides to control both pests and diseases on the farm. However, these can be a costly investment for smallholder farmers.

Pablo explains that there are many natural ways to help mitigate the impact of pests and diseases.

“For example, there is the use of agroecological practices,” he says. “These include the application of mountain microorganisms, sulfocalcic broth, rock flour, compost, vermicompost, lactic acid bacteria, coffee husk ash, and bio-potassium.”

However, Angelica notes that every farm is different. She says that it’s important to keep in mind that different agricultural practices should be implemented on each farm.

“We must see what works and what doesn’t work, because it’s not the same for everyone,” she says. “There are different necessities, varieties, climates, and situations.”

Angelica says that a good starting point for technical assistance is soil and plant nutrition. With the right balance of nutrients, trees are in the best possible position to stay strong and healthy.

In the case of the Maya Vinic co-operative, Angelica adds that OTG is encouraging practices such as pruning and shade-cleaning, as well as emphasising the importance of using fertiliser. Pablo explains that most farmers in Maya Vinic use Catimor varieties; he says these have a “better yield” but “lower quality cup profiles”.

Angelica adds: “Because this is the case, we are working with farmers to help them fertilise more. This allows them to improve the quality of their coffee.”

She also notes that the success of technical assistance programmes isn’t just reflected in better quality or a focus on sustainability on each farm. She also notes that co-operative members are supported to “replicate what they have learned in their communities”, spreading more knowledge and supporting other farmers throughout the supply chain.

Dan Bailey is the owner and founder of Amavida Coffee Roasters and a current board member of On the Ground. He says: “Coffee producers around the world are clearly being impacted by carbon pollution from developing countries. There is not much they can do but find ways to adapt and build resilience.

“With that said, I believe the work that Pablo and Angelica are doing provides solutions for coffee producers, and their programmes need continued support.” 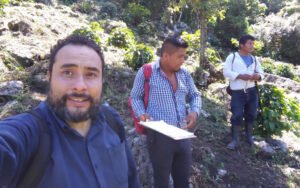 Better access to technical assistance doesn’t just help coffee farmers to successfully mitigate the impact of pests and diseases in their farms. It also helps them improve the sustainability of their coffee farm, supporting them to have a better income and a higher quality of life.

In addition, by improving their capacity to manage these risks, producers become more knowledgeable. They can then benefit their wider communities by sharing knowledge, skills, and expertise.