The USDA’s Coffee: World Markets and Trade report, published in June 2021, predicts that global coffee production figures in 2021/22 will fall by 6.2% compared to the previous crop year.

This projected fall in production can be attributed to a number of reasons, but one of the most prominent is erratic or extreme weather patterns. Weather patterns do fluctuate naturally, but it’s believed that these changes have been exacerbated by climate change.

If this trend continues, yields could fall further in the decades to come, which would in turn cause the income of millions of coffee farmers around the world to fall.

To learn more about this challenge and what we can do to combat it, I spoke with several stakeholders working on a BREEDCAFS project in northwest Vietnam. Read on to find out what they told me. 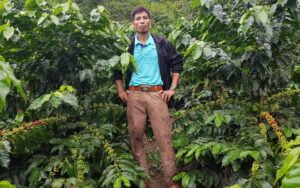 This means Vietnam is the second largest coffee-producing country in the world. Even at that scale, however, producers across the country face a number of challenges.

Ngoc Anh Sprünker is the chair at Detech Coffee, and the President of IWCA Vietnam. She says: “Vietnamese coffee has [historically] not been appreciated and hence [does not receive a high price].

“For example, in the 2019/20 crop year, there were times when traders belonging to multinationals did not pay higher than US $0.90/lb. Farmers can only [lose] at that price.”

She adds that single mothers and widowed farmers are even more vulnerable.

“The field work takes a toll on their health,” Ngoc says. “They earn less than 50% of a regular family, and their health is poorer in comparison to women in a family consisting of both a husband and a wife.”

Dr. Luu Ngoc Quyen is the Deputy Director at the Northern Mountainous Agro-forestry Science Institute (NOMAFSI). He tells me that the coffee varieties also pose a challenge.

“Catimor was introduced to Vietnam [in] 1984, but it produces inferior quality coffee when compared to other varieties,” he says. “It currently accounts for most of the arabica coffee production in Vietnam.”

While Catimor is known for its high resistance to coffee leaf rust and high potential yields, the variety has a reputation for being of low quality. However, Luu notes that this is often an unfair misrepresentation.

“The Catimor variety in Vietnam has been degraded,” he says. “The phenotype is uneven, and its quality is reduced. Therefore the selection and breeding of new high-quality and high-yield arabica varieties is extremely important.”

Pierre Marraccini is a coffee molecular physiologist at CIRAD, where he has worked since 2001. He has been working on the BREEDCAFS project in Vietnam since 2017, which focuses on coffee bean development, quality, and genetics.

He also notes that Vietnamese arabica is undervalued in the global market, mainly thanks to a lack of knowledge about good farm practices. Furthermore, extreme weather conditions (such as 2019’s heavy frost in Son La that destroyed more than 3,000ha of coffee trees) leaves Vietnamese arabica farms vulnerable to climatic hazards. 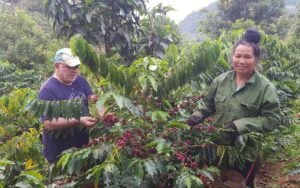 Clément Rigal is a coffee agronomist at CIRAD with a focus on sustainable farming practices and agroforestry systems.

“Wild coffee [varieties] grow in the forest under shaded environments,” Clément says. “Historically, varieties were bred to improve yield under full sunlight conditions, but at the expense of coffee quality and sustainable farming.

“As a result, many conventional coffee varieties are no longer suitable to shaded environments and their yields fall under shade trees.”

In 2017, the BREEDCAFS project came to the Son La and Dien Bien provinces, with the aim of resolving the lack of genetic diversity on Vietnamese coffee farms.

Luu says: “The overall objective is to introduce and test new F1 arabica hybrids in order to see if they are well-adapted to [the] region, and to design agroforestry practices that will create high-yield coffee systems. These will be better suited to climate change and hopefully produce high quality.”

Pierre adds: “The new F1 arabica hybrids were developed by CIRAD [and] ECOM more than 20 years ago. They were first tested in several Central American countries.”

CIRAD and BREEDCAFS have imported seedlings of two F1 arabica hybrids and provided them to 12 Vietnamese farmers. F1 hybrids are first-generation offspring of distinctly different plant varieties that have been propagated in varieties.

In total, 40,000 seedlings of Starmaya and H1-Centroamericano have been distributed to local farmers, with Catimor used as a control. These seedlings have initially been planted as “demo plots”, managed by the farmers themselves.

Initially, in June 2018, the 12 farmers were provided with 400 seedlings each, for a total of 4,800. NOMAFSI, CIRAD, the Vietnam Academy of Agricultural Sciences, and Agricultural Genetics Institute (AGI) then conducted annual phenotyping to evaluate the growth of the hybrids, and assess the presence of pests and diseases.

The first harvest then occurred from October to December 2020. The green coffee was then evaluated in laboratories by private partners (including Phuc Sinh, ECOM, and illy) to distinguish their physical, chemical, and cup qualities.

Clément adds: “Field trials and phenotyping have been conducted at a range of elevations, [so] we can see which variety is best suited to which condition.”

Dao The Anh is the Vice-President of VAAS. He says: “The initial results of the demo plots showed that the new F1 hybrid coffee varieties performed better than the local Catimor plants in terms of yield and quality.”

Local farmers were also surveyed for their feedback on the new F1 hybrids. Hoang Thi Xoan is a farmer in the Son La province who lost a substantial amount of his trees during the frost in 2019.

“The F1 varieties are better adapted to shade, which plays an essential role in quality and agroforestry systems, ultimately improving biodiversity,” Clément adds.

Cam Thi Thich is another farmer who lost income in 2019 because of the frost. Cam says: “If we had more shade trees then, the coffee plants would have been better protected from frost.”

Altogether, this positive response from farmers, private partners, and local government has prompted expansion. In the summer of 2020 and 2021, BREEDCAFS has distributed another 35,000 seedlings (for a total of almost 40,000).

They have also kickstarted the accreditation process at a local scale, to keep expanding the adoption of these new varieties in the future.

After the end of the project, all the partners involved will continue working together with the local support of ECOM Vietnam to secure Ministry of Agriculture and Rural Development (MARD) accreditation for the F1 hybrids. 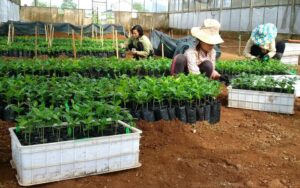 Although planting higher quality and more climate-resilient varieties is a good first step towards improving Vietnamese farmers’ livelihoods, more work is necessary in the long term.

Ngoc notes that Detech is already supporting farmers to improve their practices at farm level.

“We are working with selected farmers to increase the ratio of ripe cherries during the harvest,” she says. “We also raise awareness about drying on [patios] in the humid Vietnamese climate, which should be well monitored [to] improve cup quality.”

Cam also says that farming techniques have changed more widely: “Since we [participated] in this project, we have planted [trees] more neatly and [followed] better orientation. As a result, we use less fertiliser so the cost is reduced.

“We also keep only one main stem for each tree instead of several stems, which makes the fruit bigger.”

Dao adds that growing coffee under shade makes the farms much more sustainable.

“The past studies indicate that the F1 hybrid varieties clearly increase [in] quality when they are grown under shade. Beyond this, shade trees can also create microenvironments, and the trees adapt to climate change in these regions.”

Finally, Ngoc says that because many Vietnamese producers don’t drink their own coffee, IWCA Vietnam has helped producers in the country taste the new varieties. This, she says, helps them understand how important the better farming practices are.

“Giving away free ground arabica and encouraging farmers to drink the coffee they produce can foster a better relationship between producers and their crop.

“IWCA Vietnam organised two cupping sessions with hundreds of women to show them what good coffee tastes like. On average, the cup score for the new F1 hybrids is two to three points higher, and their green beans have less defects.” 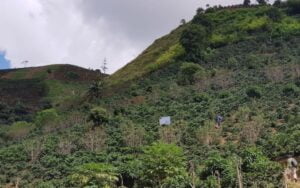 Dao says: “Once these varieties are accredited by MARD, farmers will be able to increase both yield and quality, thereby improving their income.

“These varieties will then be propagated and disseminated at [a] large scale. The local government in Son La and Dien Bien are [planning] to regenerate about 9,000ha of old Catimor plants between now and 2025.”

This regeneration will gradually lead to Vietnamese farmers producing higher quality coffee, with plants that are better equipped to withstand the impact of climate change.

Dao adds: “Over time, both domestic and international processing companies will pay more attention to the region, and trade coffee at the premium prices.

“This can ultimately benefit the whole region by improving income, being more sustainable, and providing more stable jobs.”

Hoang adds that farmers have already started receiving higher prices. “Last year, we sold these new varieties at better [prices] because [they] ripened [later]. During the late season, the price of cherries was higher.

“The new F1 hybrids taste better than Catimor, and I want to increase the areas of these new varieties in my own field.”

By 2050, scientists predict that as much as 60% of the land that is currently used for cultivating arabica plants could suffer from the impact of climate change.

“Climate change, in the form of more frequently occurring droughts [and higher temperatures], can lead to tremendous crop losses,” Ngoc says. “The new climate-resilient varieties are bred to combat these problems in a better way.”

When planting these new varieties, farmers also plant shade and fruit trees among the coffee plants. These additional trees can help them to diversify their income, improve soil health, and defend against environmental hazards.

Hoang notes that shade-grown coffee can better acclimate to the local environmental conditions in Vietnam. “Shade [trees] can reduce crop death by frost damage, and keep the soil moisture better in the dry season.”

“Detech Coffee and Macadamia Dien Bien are developing a framework for a test phase of 30ha where we intercrop these new F1 hybrids with macadamia plants,” she says. “The intercropping can increase the tree volume per hectare, which potentially increases income and creates a more diverse ecosystem.” 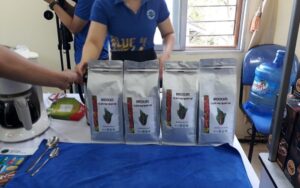 Research already indicates that these new arabica F1 hybrids are of higher quality and better equipped to cope with the impact of climate change. Farmers working on the trial in Vietnam have also shown great interest in continuing to cultivate them.

Hopefully, this trial can pave the way for more resilient coffee varieties around the world. In time, these varieties could support producers around the world to adopt agroforestry systems and plant shade trees. In turn, this would allow them to maintain farm altitude, ensuring they wouldn’t need to relocate their crops in search of suitable weather patterns and temperatures.