In 2019, Uganda was the eighth-largest coffee producer in the world, ahead of Guatemala (10th), Nicaragua (12th), and Kenya (16th). Coffee is the country’s top-earning export crop; and though Uganda is a growing producer of arabica coffee, it has been historically known for its robusta production.

A 2016 report by the Ugandan Investment Authority stated that the country was Africa’s largest robusta producer, supposedly comprising some 7% of global robusta exports. Robusta plants are native to the forests around Kampala (the Ugandan capital) and the Lake Victoria Crescent.

Yet despite a rich heritage of production, coffee consumption in Uganda, as with many other producing countries, has historically been low. To learn more about internal coffee consumption in the country and how it is changing, I spoke to Andreas Nicolaides of Great Lakes Coffee and Fiona Tanner of Gorilla Highlands Coffee. Read on to find out what they said. 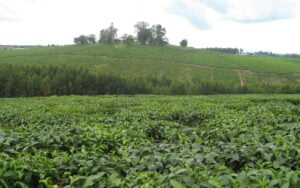 Uganda’s remarkable coffee production statistics have been supported by a period of meteoric growth in the past few years. From 2015 to 2018 alone, the Uganda Coffee Development Authority reported a 17% increase in coffee exports (4.17 million 60kg bags in real terms).

But despite a rich heritage of coffee production, for decades, Ugandan culture has instead been predominantly geared towards tea consumption.

British colonial influence began in Uganda in the 19th century. As a result, tea was introduced to the country around that time. Even though coffee was grown in and exported from Uganda, little to none was left for internal consumption, and ever since, tea has been the beverage of choice.

However, after the British dissolved the Uganda Protectorate in 1962 and the country became independent, coffee production steadily began to increase. By the 1980s, it was already a well-established and highly important cash crop.

Efforts to increase the quality of robusta started in the country around the late 1990s and early 2000s, but were ultimately unsuccessful as a result of the lack of any real market for quality robusta. As such, up until very recently, tea has been heavily preferred to coffee in Uganda. Andreas even tells me that there are times when coffee is referred to as a type of tea, as it is another hot beverage often consumed with milk. This shows just how focused towards tea consumers are in the country.

He says: “[Coffee consumption didn’t] begin [on a wide scale] until 10 or 15 years ago… people were bringing in coffee machines and roasting coffee dark in a pan before serving it as a finished product.”

However, since then, it’s interesting to note that internal consumption in Uganda has followed global trends in coffee in just a handful of years.

Andreas says that a few years later, people who previously lived abroad came to the country and “started independent coffee outlets with latte art, cappuccinos, [and so on]”.

And very recently, he adds that specialty coffee culture has emerged on a very small scale in places like Kampala, inspired in part by similar trends in neighbouring Kenya: “[Some] Ugandans have returned from working in other coffee shops abroad and are interested in following Kenya’s specialty coffee boom with Art Café and other coffee chains like that.” 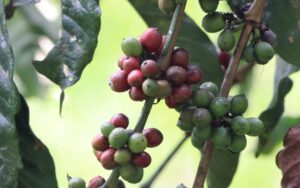 THE LIBERALISATION OF UGANDAN COFFEE

However, despite an increase in Ugandan coffee consumption, one of the most important movements in the country’s coffee sector – in terms of both production and consumption – has been a greater move towards market liberalisation in the coffee sector.

This has allowed Ugandan coffee to flourish and develop as a global coffee origin, while also empowering consumers in the country to learn more about the benefits of coffee consumption.

The first sign of widespread liberalisation came in 1991 with the founding of the Ugandan Coffee Development Authority (UCDA). After this, state intervention in the coffee trade decreased dramatically, and the efforts of the UCDA instead focused on promoting and increasing the quality of Ugandan coffee.

Fiona says: “The Uganda Coffee Development Authority has begun promoting how good Ugandan coffee really is [on an internal level].”

She also adds that the country’s coffee sector is moving further and further towards realising the importance of adding value at origin, primarily through roasting.

“There are government-funded initiatives, such as CURAD, that fund shared roasting facilities for entrepreneurs, for instance,” she says. “[Often, they] don’t have the capital to purchase and maintain standard roasting equipment and facilities [on their own].”

Finally, as market liberalisation and privatisation become more widespread in Uganda, Fiona says that more and more younger people are starting to pursue careers in coffee.

“Ugandans are recognising that the more value [you can add] at origin, the better off [the coffee] is,” she explains. 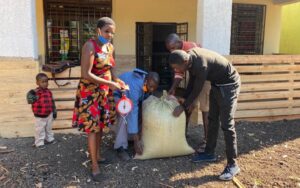 A FUTURE FOR ROBUSTA CONSUMPTION?

In and around Kampala, Uganda’s capital, coffee culture is evolving, but accessibility remains an issue.

Andreas explains that while things are improving, certain trends and beverages that are popular elsewhere in the world aren’t gathering speed. “Cappuccinos, for example, are typically only popular among expats or wealthy locals.

“[The younger generation of] coffee entrepreneurs are looking to change this… we want to make these kinds of beverages more accessible to everyone.” Even if these beverages are available on menus, Andreas notes that they generally much more expensive and may not be affordable. 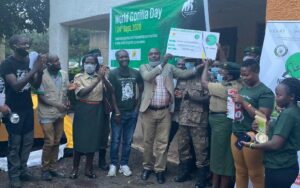 However, the prominence of the robusta plant in Uganda means that there is another option for coffee consumers. Fiona tells me that robusta makes up some 75% of Uganda’s production, and is not as highly priced as arabica coffee for internal consumption.

She says: “High-quality robusta coffees can be more accessible for many Ugandans who are interested in and proud of the quality of coffee in Uganda.”

In terms of flavours and palate, because Uganda was (and still is, to some extent) a tea-drinking nation, many consumers in the country look for a similar flavour profile in their coffee.

This means either looking for delicate flavour notes that are similar to black tea, or (more commonly) add milk and sugar to their coffee.

Andreas says: “A lot of the coffee still on the market in Uganda is roasted dark for consumers that are used to milk and sugar.”

He explains that even though milk-based beverages such as the cappuccino are typically not as accessible, some coffee professionals in the country are trying to make these drinks more popular. 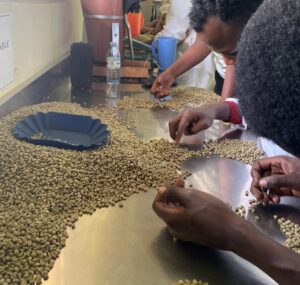 The broad range of Ugandan coffee available, as well as the volume at which production is increasing, shows that the future for the country’s coffee sector is bright. Between its huge volumes of robusta and interest in emerging trends, it is an exciting time for coffee consumption in the country.