There is no typical coffee farmer in Brazil. Brazil is known for huge farms that are mechanical picking and drying coffees, and that are run very well as businesses. There are also many small to medium size producers. Farmers typically process coffee to green stage something that is called bica corrida in Brazil. At this stage the coffee is not sorted or clean and samples are offered to exporters or deliver to a cooperative. Exporters cup and classify the coffee giving producers feedback. The exporter will then clean and sort the coffee, and export green coffee.

Brazil is known for producing stable, consistent coffees with a certain profile; milk chocolate and nutty that are cheap. This is a profile that most roasters are only willing to pay a certain price for, and intern this price for a producer limits their ability to create a different, a better coffee. Brazilian coffees can be something different than what we have become accustomed to expect if we are willing to pay for what it costs to produce them.

Producers have to manage their production to minimize costs, as the costs of production in Brazil are high relative to what the market will pay for these coffees. This means that unless there is a secure market for a more expensive coffee a producer cannot invest in quality.

Brazil ‘s claim to fame is being the world’s biggest producer of coffee. The production is spread across 12 states and 6 differentiated producing regions. Coffees from the Minas Gerais region is responsible for 50% of the countries production.

History has coffee entering Brazil in the 1700s and production spreading from the North to the Southeastern mountainous states and thriving here because of the temperature, heavy rainfall and distinctive dry season. Similarly the abolishment of slavery in 19th century lead to an influx of millions of immigrants from all over the world and who provided a ready and able work force for cultivation.

Beginning in the 1840s, Brazil rose to become the world’s preeminent coffee producer and continues to be the largest producer of coffee today, currently controlling about 30% of international production. Until very recently, Brazil’s reputation in the coffee world has rested on its massive production volume but times are changing.

The country’s coffee farmers of today are amongst some of the most empowered in the world, given Brazil’s steady rise in socio-economic power since the mid-1990s; some of the major trickle-down effects being increases to education level, wages and overall standard of living. These factors have translated to farmers having a greater capacity to focus on becoming competitive within specialty markets, instead of just on ensuring their farms are economically viable. The evidence of this is in the steadily increasing number of farmers who are experimenting with various processing methods and the planting of exotic varieties, to meet the ever-growing demand within specialty markets.

Since the 19th century, the weather in Brazil has been one of the liveliest topics of discussion among traders and brokers, and a major deciding factor in the global market trends and pricing that affect the coffee-commodity market. Incidents of frost and heavy rains have caused coffee yields to wax and wane over the past few decades, but the country is holding strong as one of the two largest coffee producers annually, along with Colombia.

In Brazil, coffee farmers either work together cooperatives or private exporters, growing and harvesting cherries, wet processing and drying them on-site and then selling coffee in parchment form to their partnering cooperative or exporter.

One of the other interesting things Brazil has contributed to coffee worldwide is the number of varieties, mutant-hybrids, and cultivars that have sprung from here, either spontaneously or by laboratory creation. Caturra (a dwarf mutation of Bourbon variety), Maragogype (an oversize Typica derivative), and Mundo Novo (a Bourbon-Typica that is also a parent plant of Catuai, developed by Brazilian agro-scientists) are only a few of the seemingly countless coffee types that originated in Brazil and, now, spread among coffee-growing countries everywhere.

Coffee is grown and agronomically managed in different ways depending on the kind of producer, size and intention to produce quality. There is a lot of access to knowledge on agronomy for Brazilian producers, sometimes this is valuable and sometimes it is misguided.

If producers want to improve their production they have access to the tools to do so, the biggest limitation being the availability of finances to invest.

In order to maintain production at the scale and scope for which Brazil is famous, the national industry has adopted specific and to some degree innovative means to achieve both picking and processing in the most highly efficient and organized manner possible, and the structure of the average farm or estate is designed around utilizing these systems and maximizing the yield potential per hectare.

Cost of production in Brazil has risen substantially in the last years, due to general cost of living increases. Labour being one of the most costly parts of producing coffees, while on flat or larger farms mechanical picking is a viable option. For smaller or farms situated on hilly terrain this is not possible and farmers have to optimize capturing as much of the harvest as possible with limited resources for picking. It is common in Brazil to see cherry of all sorts and colours in the coffee picked and drying, the common belief in the industry internally is that this will be sorted out through the milling process. The reality is, that it is just too expensive to pick only ripe cherries for the prices that Brazilian coffees are sold at in the market.We are working with producers to do some lots with selective picking, and while we undoubtedly see a difference in the cup the producers report a difference in cost of 3 times that of standard picking procedures.

Brazil is processing coffees as washed, pulped natural and natural, with the majority of the volumes being natural.

Historically in Brazil the flowering has been very uniform and this has allowed Brazilian producers to pick mechanically or to pick everything in one go and better manage the costs of picking. In recent years the change in climate and the variations from year to year have been making this more difficult, and means that there is more unripe and overripe cherries mixed in with the ripe fruit. The belief in Brazil is that these coffees are cleaned up in the after production processing, in the mill.

This is a challenge though because the effect this has on quality.

Drying in Brazil is almost entirely done on concrete patios, in some cases where a producer has a very simple set up, Natural coffees can even be found to be being dried directly on the ground. Some producers use both patio and raised African beds.

In Minas Gerais at the time when a lot of the coffees are drying the daytime temperature can reach highs of around 25 degrees celsius, but both in the evening and morning it can be very cold. While the raised beds allow for aeration the patios absorb the heat from the day and carry this into the cold temperatures of the night and early morning not allowing the coffee to drop in temperature to the same extent as the raised African beds. 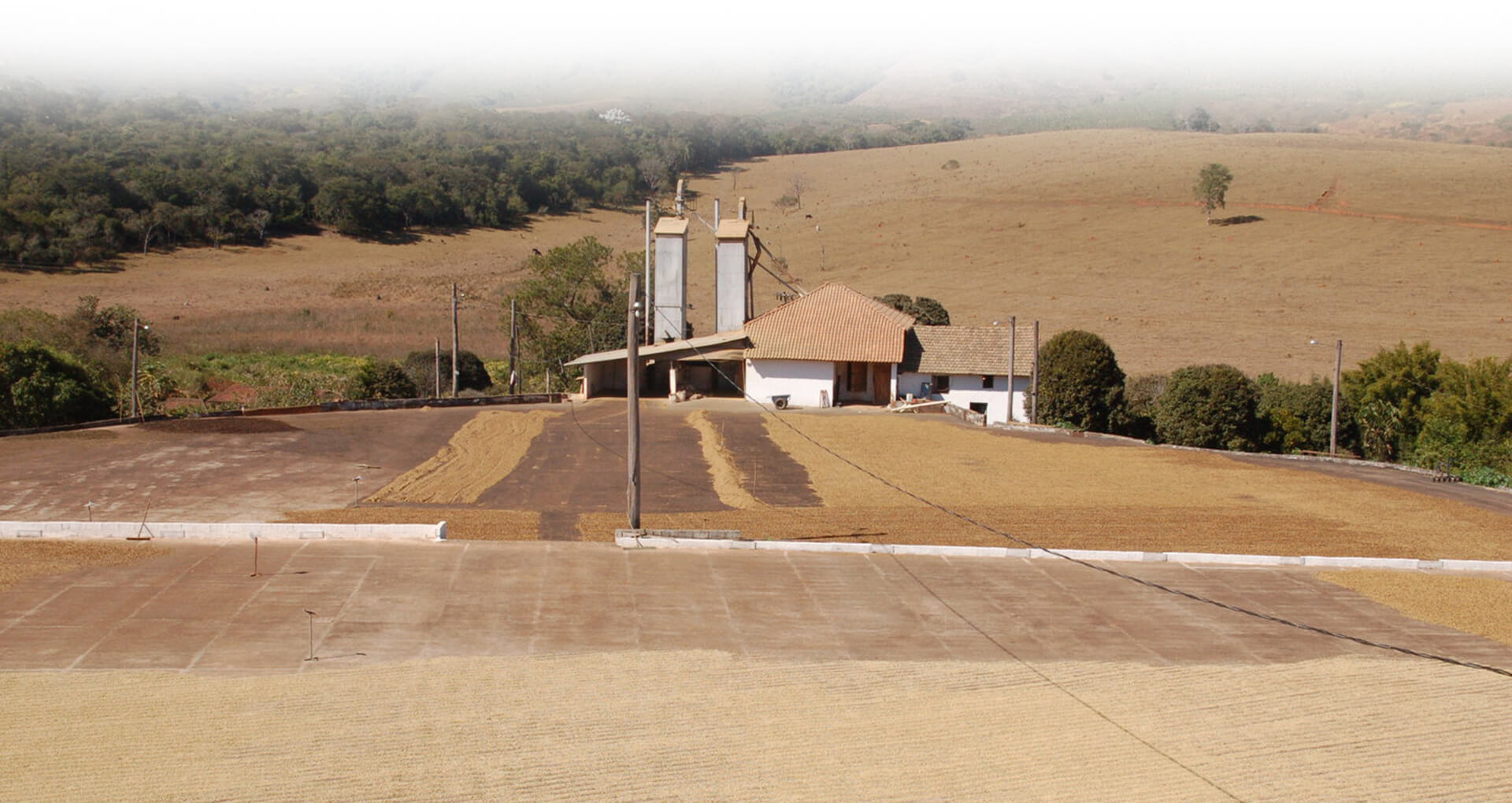