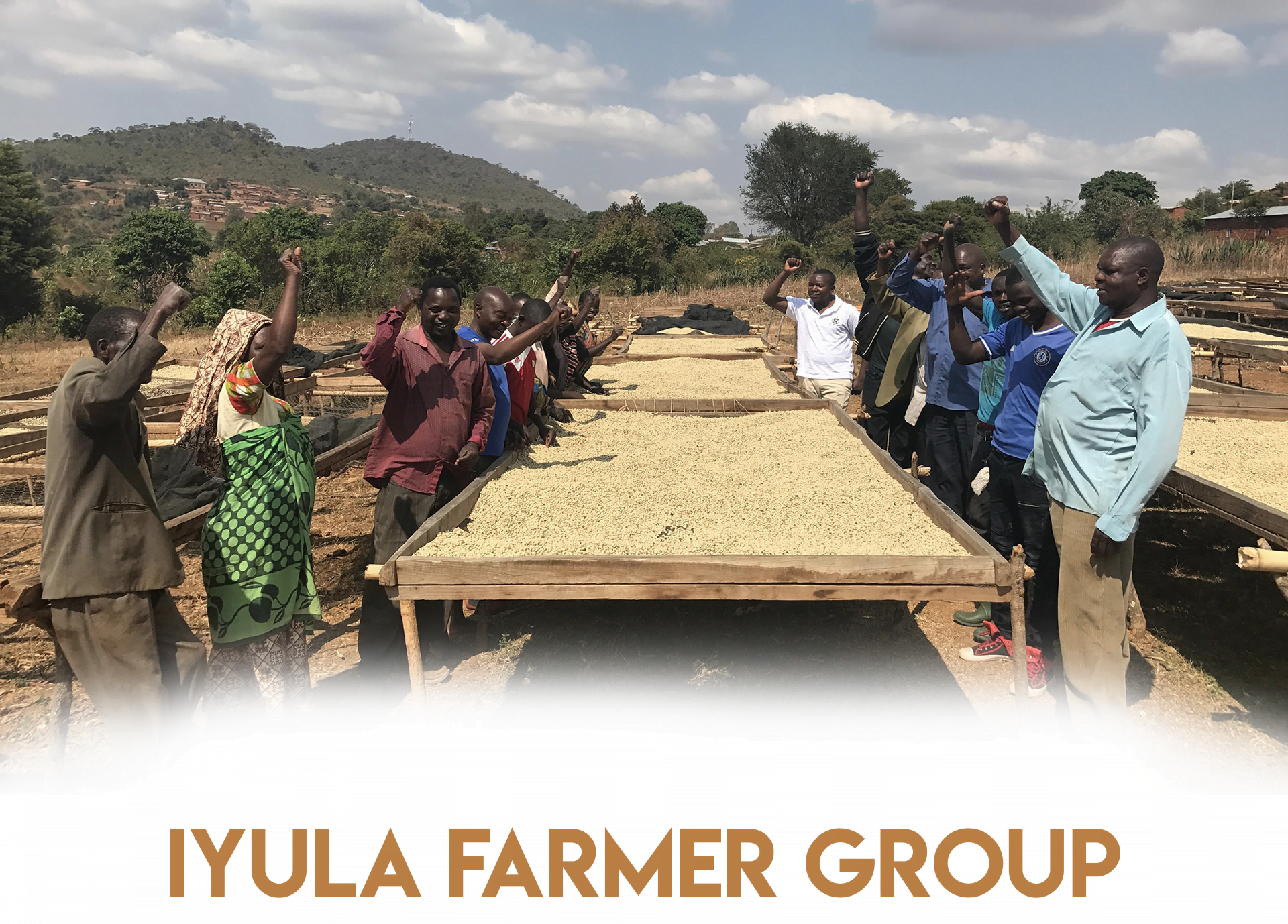 In the Iyula villages, coffee was first cultivated in 1938. The seeds were brought by the great grandfather of Mchina, the secretary. He got the seeds from missionaries in the Rungwe district. For them, recognizing the different soil types in order to use the right fertilizers is one of the main challenges. This AMCOS (agricultural and marketing co-operatives society) was created in 1952 under a different legal form and was owned by the CAT (Coffee Authority of Tanzania) until 1981. They bought a pulper in 2009 and started producing washed coffee in 2010. The water comes from the Msimbizi river and is transported via channels.

Importers have been working with Ibero for several years, a large trading company under the Neuman group umbrella. When the Coffee Authority of Tanzania in the year of 2018 decided to prohibit farmers to do direct export through representative companies without holding their own export license, Ibero chose to stay and adapt to the situation. The Tanzanian coffee authorities decided to follow the Ethiopian model by creating a centralised auction system that removes exclusivity and partial traceability, and gives any buyer in the world access to the coffee. They hoped that it would drive buyers to compete for the best lots and increase the final price, giving more back to the farmers. What the government didn’t realise was that, by changing the rules this way, no export company would benefit from the investments made on farm or station level. Furthermore, it was too expensive for farmers to hold their own export license, hence buyers still had to rely on exporters to consolidate shipments which meant that going through the auction was inevitable. As a result of the lack of investment, farmers were not able to match the inputs needed, which in the long run would lowered the yield and quality. For many of the largest commercial roasters in the world, Tanzanian coffee could be substituted for coffee from other countries, and that’s what happened.

Ibero on the other hand, saw this as an opportunity as few exporters were left in the country. They adapted to the new rules, offered to split the cost of investment in the farms and stations 50/50 with their partner AMCOS, and started buying AMCOS specific lots at the auction. This is how we have been securing some of the best Tanzanian lots we have ever tasted.

Many of the AMCOS are great simply due to their location in Mbeya, and they build on this potential quality by investing in better systems and protocols. To maintain quality standards, Ibero has invested in eight Penagos pulpers that will go to eight of the largest AMCOS in the region. This will enable the stations to use less of the already scarce water and create a cleaner, more transparent coffee.

Every day of production the local team differentiates the coffee destined for the improved and better quality lots (Grade 1) from the normal preparation for Grade 2 and Grade 3. Flotation systems separate some of the coffees on-site for better performance. These coffees are assigned a quality team to carefully tend to their processing. They generally do lot separation based on 150 bags of parchment, equal to 100 bags of greens, but they also do smaller lot sizes, especially for Grade 1. The coffees are separated according to the days and areas of harvest as well as by preparation.

In the Iyula villages, coffee was first cultivated in 1938. The seeds were brought by the great grandfather of Mchina, the secretary. He got the seeds from missionaries in the Rungwe district.

There are 230 smallholder farmers who each deliver small quantities of cherries to the AMCOS, or to collection centers in nearby villages. The average farm size for producers delivering to the Iyula washing station is half to two hectares. These mid-land dry farms have clay loam soil and are organic by default. For them, recognizing the different soil types in order to use the right fertilizers is one of the main challenges. Organic compost is becoming more common, pruning less common. A farmer can typically have fewer than 1000 trees per hectare, and one tree typically produces a quantity of cherries equal to less than 100 – 200 grams of green coffee.

Farmers deliver a mix of local improved Bourbon hybrids like N39 and Kent 423.

The main season for this part of Southern Tanzania is end of May to July, with the coffee trees flowering between September and October. Coffee cherries are harvested by family members, then hand-sorted to remove unripe and overripe cherries before they are delivered to the washing station for processing.

The cherries are pulped either by hand or with a Penagos pulper. Skin and fruit pulp are removed before the machine grades the parchment in water as 1st or 2nd quality, determined by density.

The parchment is fermented in water for 18-36 hours.

Washing and grading in channels

Coffees are washed in channels, and graded in water by density. The lower density (lower quality) will float and are removed, leaving only the denser and therefore higher quality beans, which are separated as higher grade lots.

Parchment is then soaked in tanks of clean water for 8-12 hours before it is moved to the drying tables.

Parchment is dried on raised beds in the sun for 8 – 14 days. The time depends on the thickness of the layers and temperatures. For the premium grades they will continuously sort the parchment at the drying tables. Coffees are piled up and covered in shade nets or plastic during the hottest hours of the day and overnight.

Warehousing at the washing station

After drying, the coffees will be packed in jute bags and stored in the local warehouses onsite which significantly improves the quality of the coffee. Farmers used to dry the coffee in front of their houses but there was the problem of theft. At night people would come and steal the drying coffee, so farmers would store it inside at night time, which reduces the quality of the coffee during the tricky drying period. To solve this issue, the AMCOS built washing stations with drying tables or patios and hired security personnel to protect the coffee as it dries. They also built warehouses to improve the overall quality. Lot sizes can vary from 50 – 300 bags. They will normally be stored 1-2 months before they are moved. In some cases the parchment will be hand-sorted in the warehouse.

After the harvest season is over the coffees are moved to warehouses and dry mills in Mbeya, where the coffee will be stored until it has been auctioned off.

The coffee will sit in parchment in a warehouse in Mbeya. This is when we’ll receive a sample of the stock lot and decide if we would like to buy it or not. It remains in parchment until it is contracted and the destination for shipment is confirmed.

When confirmed the container is stuffed and transported to Dar es Salam where it awaits shipment.

Besides the ability to produce great coffees on a good scale, we work with Ibero because they genuinely care about the farmers. They are prepared to match whatever the coop and farmers are willing to invest in their own farm.

Ibero builds schools to support the local communities. The company contributes to the land and pays for the construction, and ensures access to clean water for the students. Ibero employs teachers and local community leaders to take care of the school after it has been completed.

We strongly support education, both in general and in coffee, and we invest in educational projects that help increase yield and quality, and those that prepare the coming generations of coffee farmers for climate change and the developments in the market. Nordic Approach supports Ibero’s school projects as part of our buying program. 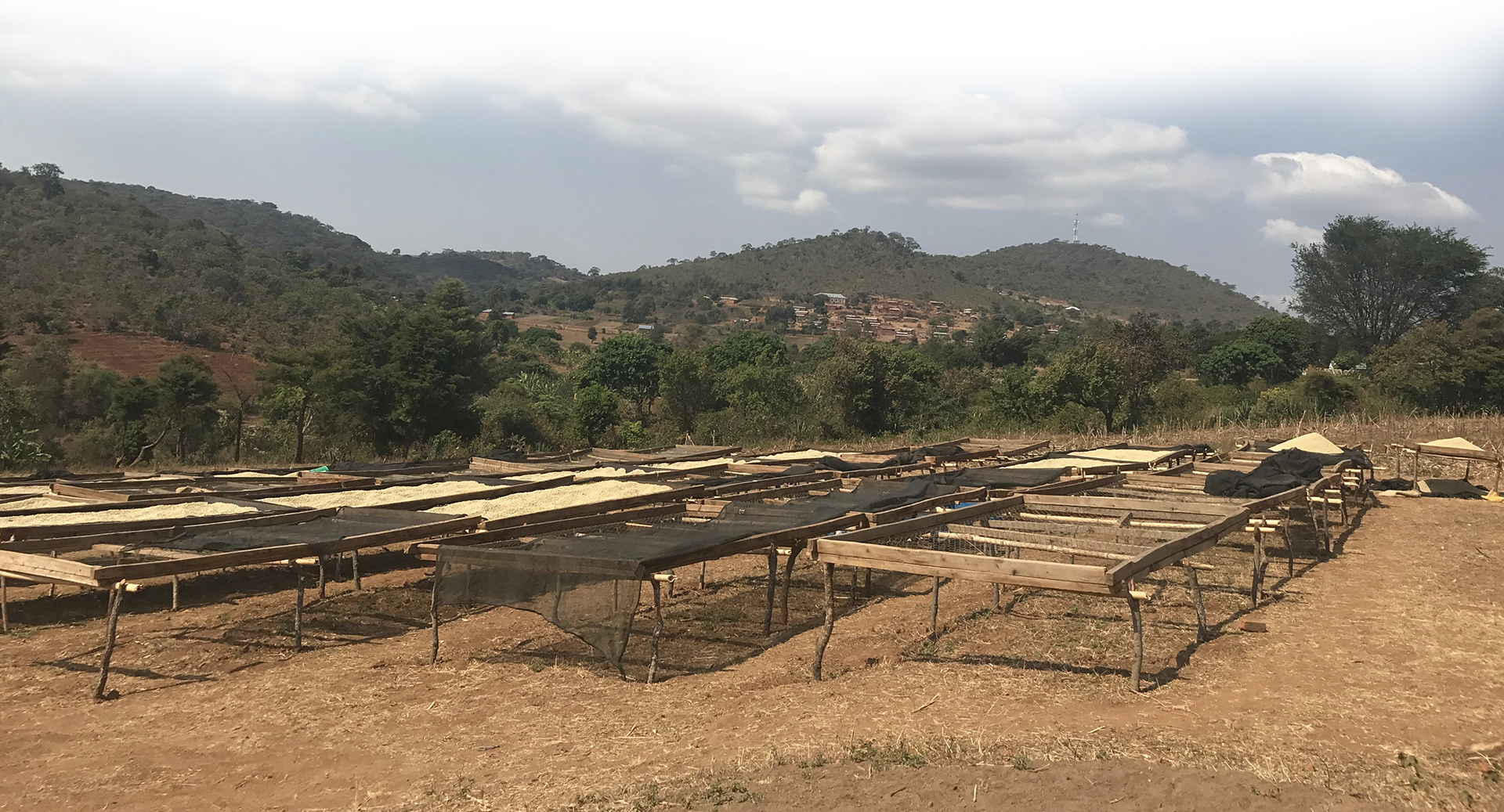