Multisensory Perception of Flavor: Investigating the Role of Cup Color and Weight on Coffee Evaluation 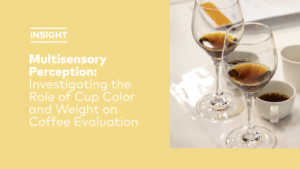 AS I am fond of saying, we taste more than what’s just in the food when we eat: Flavor, as I and many other believe, is in the mind.

Aside from how food looks, smells, sounds, and feels, the sensory information we gather from the eating environment, not to mention our own emotional state and personal beliefs, all play a role in the final perceived flavor of the food. After all, I completed my PhD at the Crossmodal Research Laboratory at the University of Oxford, investigating how music can change how food tastes.[1] Now, I have my own lab at the Department of Food Science in Aarhus University where I investigate how contextual information, whether presented in physical or virtual reality, shapes our eating experiences.

With my background as an experimental psychologist, I am often at odds with sensory scientists who strive to turn the human being into an objective sensory instrument. Sensory panels are trained extensively to evaluate the sensory attribute intensities as precisely and consistently as possible in controlled laboratory conditions. While this is crucially important for product development, most of us don’t eat in white sensory booths. The real world is messy, and I am specifically interested in how our conception of food is shaped by all its surrounding information: packaging and labelling, background ambience, and individual differences.

Earlier this year—before COVID-19—I gave a talk on the “Multisensory Perception of Flavor” at the EU edition Sensory Summit. As part of my talk, I conducted several live studies with audience members to investigate the influence of cup color and weight on the evaluation of coffee.

What Do We Know About Cup Color and Weight?

The correspondence between color and taste is one of the most studied. We tend to associate specific colors with specific tastes: for instance, red/pink is typically associated with sweetness, green with acidity, and black with bitterness. Not only do we tend to find red-colored foods and drinks to be sweeter (at least, in the context of sweet foods), but evidence has shown that foods tasted in red or pink bowls or cups could also taste sweeter compared to those from white containers. In another example, the same strawberry mousse tasted 15% sweeter when served on white compared to black plates. In the realm of coffee, Fabiana Carvalho, a coffee sensory researcher from Brazil (and a colleague at the Crossmodal Research Lab!), has recently published a study demonstrating that cup color can significantly influence the sweetness, acidity and liking judgements of special coffee.

Compared to color, we know much less about how the weight of servingware might affect food perception. A series of studies from the Crossmodal Research Laboratory in 2011-12 revealed that yoghurt samples served from a heavier bowl was rated as more satiating, liked more, and expected to be more expensive. A few years later, it was demonstrated that greater weight—regardless of whether it be boxes of chocolate, cans of soft drinks, or even bottles of liquid soap—increased perceived fragrance/flavor intensity as well as a consumers’ willingness to pay.

Figure 1: Study setup: A) white and black cups used in the color study; B) how the cups were made 20 g heavier with metal washers in the weight study (bottom view)

Figure 2: Rating scales used by the audience to evaluate each coffee

The brewed coffee used in both experiments were identical, from a single-estate in Tarrazu, Costa Rica. For both experiments, people first tasted the sample of coffee, then used 1-9 scales to rate the coffee’s aroma intensity, flavor intensity, acidity, sweetness, bitterness, body, and aftertaste (Fig. 2). The questionnaire was administered online via the Qualtrics platform, and people responded on their phones.

After dropping incomplete responses, data from a total of 113 audience members (50 women, 63 men, aged 16-65 years, average age = 37) were analysed. A Coffee Knowledge Test (adopted from Croijmans and Majid, 2016[2]) administered at the end of the live experiments revealed that mean coffee knowledge was 5.5 (SD = 2.0) out of 8, showing that attendants had on average a very high level of coffee knowledge.

Figure 3: Average ratings of the same coffee served in a white versus black cup. Body was the only attribute showing a significant difference, with people rating the black cup as being fuller bodied. Error bars indicate standard error of the mean.

So, did cup color alter how the coffee was rated by our expert audience? (Fig. 3)

Across the sample of Sensory Summit EU participants, we found that, contrary to what we understood from previous experiments with strawberry mousse, serving the coffee in black versus white cups did not significantly influence its perceived sweetness or bitterness. However, there was a significant difference in perceived body, where the coffee served in the black cup was significantly full in body compared to the white cup.

Figure 4: Average ratings of the same coffee served in a lighter versus heavier cup. Aftertaste was the only attribute showing a significant difference, with people rating the heavier cup as having a longer aftertaste. Error bars indicate standard error of the mean.

When it came to cup weight, we did not observe any differences in aromatic or flavor intensity, as we might have expected based on previous work with soap containers. However, there was a significant difference of cup weight on aftertaste, where the aftertaste was longer when the coffee was served in a heavier cup.

What Does This Tell Us About the Importance of Coffee Cups?

We expanded on previous research by using more nuanced attributes such as body and aftertaste, which goes beyond the usual consumer questionnaire of liking (and maybe basic taste) questions. I was able to do this because most attendants were knowledgeable about coffee, as verified by the Coffee Knowledge Test. That said, it is also plausible that experts are less influenced by extrinsic factors, being more used to judging coffee objectively. Given the relative expertise of the audience present, the question remains whether consumers might be similarly influenced in their sensory perception?

Beyond the obvious lack of ecological validity in the study (i.e., drinking coffee from paper cups in an auditorium is not the same as drinking it at home or in a café), it should be noted that one reason why we did not see more differences in the color experiment is that the white and black cups were both white on the inside, therefore creating the same stark contrast with the black coffee. How might the results be different if the cups were also black on the inside (similar to the cup color studies conducted by Fabiana Carvalho)?

I initially designed these live experiments to create a more engaging experience for the seminar attendants. The fact that audience members were able to answer questions on their phones meant I was able to show preliminary results at the end of my talk instead of waiting for months or years for publication in a peer-reviewed journal. I am a strong believer in involving the public in research, and thanks to the Sensory Summit EU, I was able to take the opportunity to test a relatively large sample (N = 113) of coffee experts at once, which would have otherwise been difficult. I am hopeful that, given the enthusiasm of the specialty coffee community, more research will move out of the laboratory in the future.