There is so much great coffee grown in Colombia, the challenge is ensuring these micro lots and distinct smaller blends find their way to roasters.

Colombia is an enormously diverse country with many micro-climates and soil conditions ideal for growing and processing exceptional coffee. However, the majority of coffee farmers in Colombia are smallholders with limited resources and limited access to the specialty market.

CHALLENGES IN PRODUCTION AND HARVESTING

Finding pickers is a constant challenge that has only been made worse by the Covid-19 pandemic.

Climate is always a challenge. In Huila it can potentially rain non-stop for weeks during harvesting, fermenting and drying. In Nariño it can be the opposite, with high temperatures and droughts. This will again affect maturation, fermentation and drying. The growing conditions and practices can often compensate for that, and the outcome can be absolutely amazing.

Farmers are typically smallholders with around 2-5 hectares of farmland. Coffees are usually processed at small micro mills on the farm. Farmers deliver parchment to exporters or cooperatives who cup and grade the coffee, dry mill and export green coffee. This is the predominant value chain for the coffees in Colombia.

In Colombia, Caturra is generally known for having the best flavour attributes. If the farmers do everything right at each stage in the production cycle. If they are well treated by the producer, and picked when they are extremely ripe, meaning a very deep red to purple colour, they lose the common herbal and astringent flavours associated with these varieties, and become super sweet and complex. Most farmers will have a mix of 1-3 of these cultivars which helps maintain diversity and mitigate the risk of disease and infestation.

Coffee came to Colombia in the late 1700s by way of Jesuit priests who were among the Spanish colonists, and the first plantings were in the north of the country, in the Santander and Boyaca departments. Throughout the 19th century, coffee plants spread through the country, with a smaller average farm size than more commonly found throughout other Latin American producing countries.

Commercial production and export of coffee started in the first decade of the 1800s, but remained somewhat limited until the 20th century: The 1927 establishment of the Federación Nacional de Cafeteros de Colombia (aka FNC, see below) was a tremendous boost to the national coffee industry, and Colombia quickly established itself as a major coffee-growing region, vying with Brazil and Vietnam for the title of top global producer.

Colombia still produces exclusively Arabica coffee, and though the country suffered setbacks and lower yields from an outbreak of coffee-leaf rust in the early 2010s, production has fairly bounced back thanks to the development and spread of disease-resistant plants, as well as aggressive treatment and preventative techniques.

There are more than 500.000 coffee producers in Colombia, 80% or more are having less than 3 hectares. Coffee is grown all over the country and is spread out in 19 departments (regions), most of them along the three mountain ranges coming from the Andes in the south. The biggest and most well-known regions are Antioquia, Huila, Tolima, Cauca, Nariño, Caldas, Santander and Sierra Nevada.

The country’s northern regions (e.g. Santa Marta and Santander) with their higher temperatures and lower altitudes, offer full-bodied coffees with less brightness and snap; the central “coffee belt” of Antioquia, Caldas, and Quindio among others, where the bulk of the country’s production lies, produce those easy-drinking “breakfast blend” types, with soft nuttiness and big sweetness but low acidity. The southwestern departments of Nariño, Cauca, and Huila tend to have higher altitude farms, which comes through in more complex acidity and heightened florality in the profiles.

To capitalize on this broad spectrum of flavors and to emphasize the diversity available to roasters and consumers from within a single country, the coffee growers’ association has begun to provide origin distinctions, and has developed aggressive marketing campaigns designed to boost the regions’ signals to buyers worldwide.

The latitudes are ranging from 2 degrees to about 12 degrees. Altitudes for coffee production can vary from 1200 – 2200 meters above sea level. All producers are picking, pulping, fermenting and drying their coffee themselves in their “micro beneficios”. The coffee is then sold in parchment and delivered a local town to a bodega. The bodega is a purchasing point for parchment and can be represented by a growers association, a cooperative, an exporter, or just an independent local middleman. There’s always someone buying random coffee, while some others have quality programs or strong relations with the producers.

Coffees are picked in three to four passes, meaning the producers and pickers pick the ripe cherries in one block, then wait until there the remaining cherries begin ripening before doing another pass. It can be hard to incentivise your workers to only pick the ripe cherries as their payments are usually based on volume, and the work is harder. Even when you’re paying them extra for the effort, it can be hard to changed entrenched mindsets. If a producer wants exceptional qualities they often have to follow up very closely, or hand sort the cherries after picking, before they begin processing. Generally the first and last passes produce lower quality, and the second and third will be considered as the best, with more ripe cherries and uniform quality.

Many of the Colombian coffees are slightly over fermented. In some cases the farmers do it on purpose as there are buyers or exporters asking them to stretch it to get more complexity fruit and body, but often it’s just by accident or by mistake. Fermentation can add some complexity and structure, but often they can get rough, vinegary.

This is the most common and widely used method. The farmer will have a small beneficio, a small manual or electric pulper and a fermentation tank. They pulp the cherries in the afternoon and send the beans directly from the pulper to the fermentation tank. The coffee can sit there from one to two days, depending on the temperature. Higher temperatures will speed up the fermentation process, and lower temperature will slow it down. Some producers do intermediate rinsing with water, which can also help them control the process.

Some producers use the wet fermentation method, meaning they add water to the tank after pulping. Some of the best coffees we have tasted in Colombia have been fermented this way. They often change the water numerous times, which will both slow down the fermentation time and provide a bigger window between properly fermented and over fermented. It also helps uniformity as producers can skim off the floaters during the rinse and get a better selection.

Methods for washing and grading vary widely. Some producers have channels, some don’t. The channels are often short, and they don’t require huge amount of water. Producers normally stir the coffee in the channels before they remove floaters. Producers without channels commonly wash the coffees in the fermentation tank and skim off the floaters before sending the coffee to the drying table.

Smallholders in regions like Huila, Tolima, Nariño usually sun-dry their coffees on roof tops or in parabolic dryers that almost work as green houses. There are many different variations and construction types, but generally they are all systems that protect the coffee from rain. In many places it can either be too hot, or too rainy and humid, often both in one day. Generally, consistently great coffees from producers who have drying systems with good ventilation that allow them to reduce the humidity of the coffee to less than 11% between 10 to 18 days.

Coffee in Colombia is a cash crop, meaning you can sell your coffees any day in big or small volumes and get direct payment in cash. Every small town in the coffee growing areas will have purchasing points for parchment, called bodegas. These can be run by local traders who resell to exporters, exporters themselves, growers associations, cooperatives or the FNC. In many cases they are located in the same place and compete to get the coffees from the growers. Most parchment buyers will assess the quality simply by looking at the physical attributes, and pay the producers based on the yield factor. They do not care about the individual flavour attributes and generally add the recently purchased coffee to the pile. Coffees from all the different producers get mixed and sold as a general “excelso” quality coffee from that region and there are exceptions.

Today, Colombia it is recognized as one of the most progressive specialty coffee origins in the world. Temperature, altitude, solar radiation and availability of water influence quality, but soil might be Colombia’s most important component as volcanic ashes provide sufficient organic materials. This enables farmers to grow rich coffee profiles that often include favorable cup characteristics: clean aroma, high acidity and medium body.

Specialty coffee from Colombia is often full-bodied and has a bright, vivid acidity. The profile also reveals an intense aroma, sweet notes, citric fruits and can exhibit qualities of malts, dark cocoa and nuts.

Most coffee grows between 1200 and 1800 m.a.s.l., but in some regions it surpasses altitudes of 2000 m.a.s.l. Common varieties cultivated by smallholders are Typica, Bourbon, Caturra, and Castillo. Castillo is a popular variety in Colombia because it offers a high yield.

The establishment of the Federacion Nacional de Cafeteros, in 1927, is an important moment in Colombian coffee history. Colombian coffee growers started to combine their strengths to defend their rights and to enhance the quality of life for coffee producing families. Each Municipal – City – has their own elected spokesman that represents the local community. It is considered one of the largest agricultural NGO’s in the world.

The FNC has a purchase guarantee program with buying stations set up all over the country, meaning farmers can sell their coffee any day of the year to the FNC, for a price that is widely published. This is a great safety net for farmers, but it can also see exceptional coffees disappear into larger regional blends. 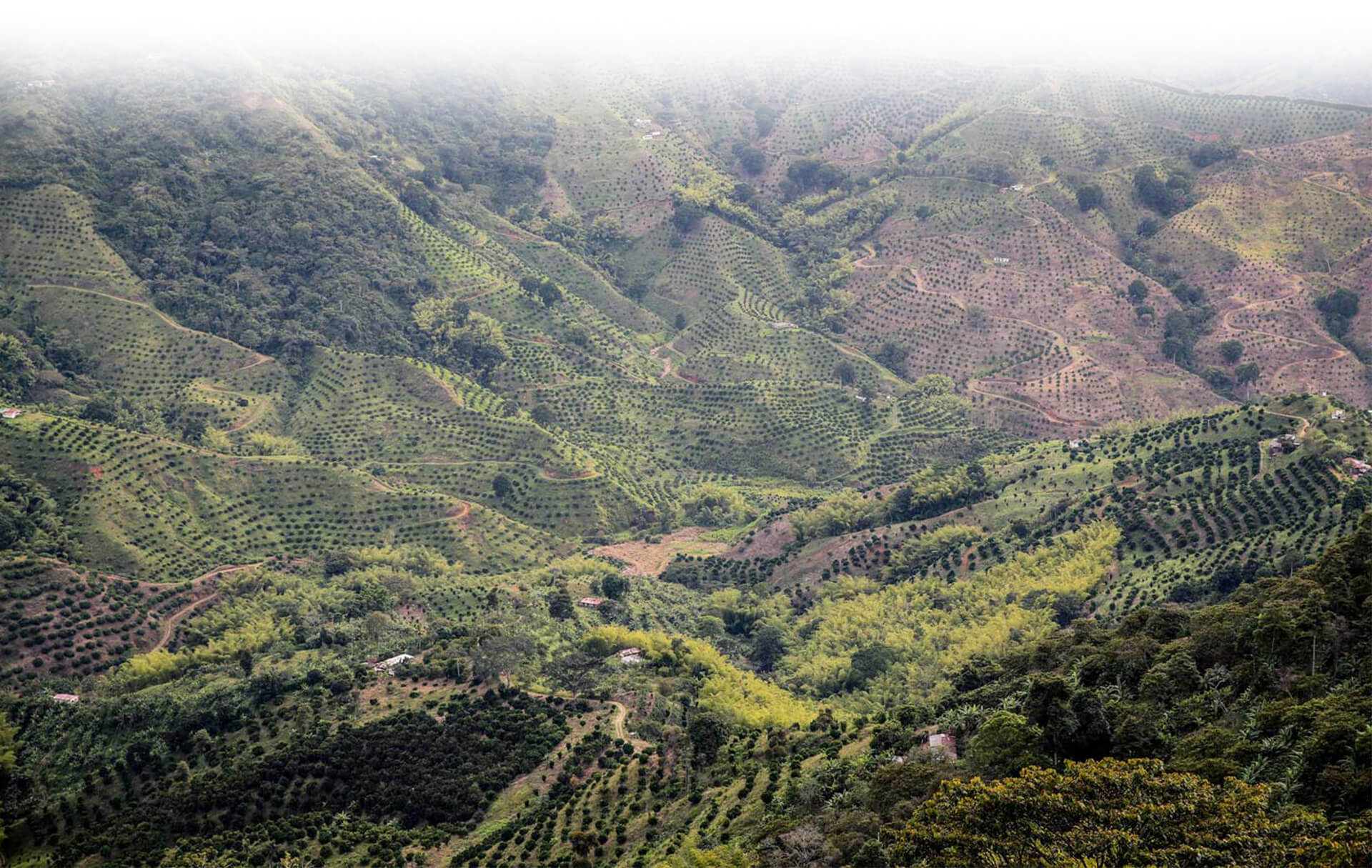